Before you start...
Egyptian Daily Life

Click the link below to learn about the games Ancient Egyptians played.

Civilizations and cultures around the world seem to share in the love of playing games. Some of the games in ancient Egypt were designed just for adults, but others were played by people of all ages.

Archaelogists discovered painting of Egyptians playing the game in ancient tombs. This painting is from the tomb of Queen Nefertari. 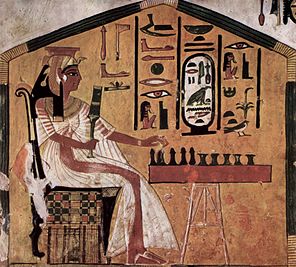 This Senet gameboard and pieces were found in the tomb of King Tutankamen. 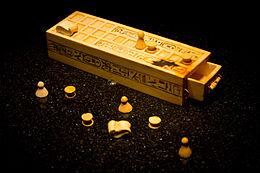 Make your own Senet game using these instructions. Gather your supplies and read the directions all the way through before starting.

How to Play Senet

2. Each player drops the throw-sticks:

3. The first player to score 1 starts, and has to use whichever counters are on the even-numbered squares.

4. At the start of each turn, a player drops the four throw-sticks. The player can then move any counter as many squares as the throw has scored, but the counter can only be moved to an empty square or to one occupied by an undefended opposing counter.

5. A counter is undefended if the squares to either side of it are empty or are occupied by one or the other player's counters in adjacent squares, they are safe from attack.

6. If an undefended counter is attacked it is moved back to the square that the attacking counter came from.

7. If a player cannot move any counters forwards, a counter must be moved back by the score thrown. If no counters can be moved, the score is lost.

9. All the counters have to land on Square 26 before they can go any further. The exact number must be thrown to reach this square.

12. The first player to remove all his or her counters from the board is the winner.